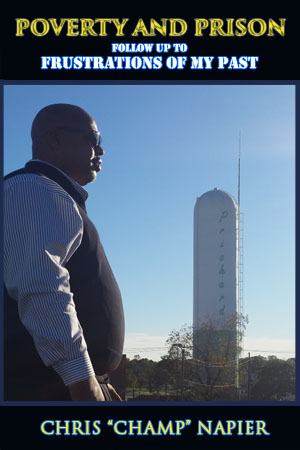 Violence has always been involved in my life…From witnessing the death of my father at three years old, to fighting in the hood, and at school, prisons etc…Never attempting to glorify my past, but to use it as a teaching to tool to connecting with today’s youth. I saw a lot of my childhood friends being traumatize by their current situation. In my book titled “Poverty and prison follow up to frustrations of my past” I Clearly explains how poverty breeds violence…Pettie theft, gun violence and high school drop outs are to normally to people who succumb to poverty stricken environments, which often leads to lack of self- esteem, depression, alcohol and drug use. A great misunderstanding of this lifestyle has been passed down and has caused generational cures. To many R.I.P. T-shirts and balloons flying on street corners has provoked the community advocate within me to take A conscious and firm stand against the social injustice that is handicapping our community.

life in prison at age eighteen. Inside of Alabama infamous prison. I experience culture shock, due to all the corruption, violence and sexual mischief and many evil acts like I never seen before. Quickly I realize that the majority of the inmates where from poverty, functional illiterate and full of self- hate. As I tried to become rehabilitated I discovered so many flaws and contradictions in the prison rehabilitation process that I concluded the whole system is a fraud. Out of disappointment. I Begin to reform myself, by reading various books, by remaining studious my search for reform is complete. During my incarceration I tutored other prisoners and become A model inmate.

Freedom, after fourteen years and eight months in prison on August ,30. 2004 I was released returning to my hometown I felt like a tourist everything seemed strange, it was a lot I had to learn, so many challenges I had to overcome with prayer, patience and perseverance I would conquer them all …I have denounced my past and redirected my life, on july,15. 2015 I received a pardon from the Alabama pardons and parole board.in February of 2016 I released a documentary entitled “Redemption beyond my past” my mission is to educate the community on gun violence, drug use, dropping out of school and mass incarceration..